On Sunday, I discovered that I had an almost full tank of propane and that completely derailed my carefully constructed list of chores since I knew I had bisque sitting on a shelf just waiting for a new glaze recipe. So some chores were ditched and some hurried through so I could get have enough daylight to at least get started. I don’t mind finishing in the dark. It makes it easier to see into the kiln.

) and worried over the recipes in the back until I came across a copper matte that I hadn’t noticed before that included copper carbonate and cobalt oxide. I use copper all the time, always looking for that splash of shiny penny or hint of red. Adding cobalt to the mix means blues are almost guaranteed especially with the oxide as opposed to the carbonate.  Not really sure how this particular recipe escaped me for so long  but it would be the glaze of the day.

So there was some scurrying and some glazing and some set up but in short order a tongue of orange flame graced the chimney of the kiln while I worked through a yoga routine on the nearby porch.

That was a bit of an experience. It was dark save for the light from the kiln as I focused on my own breath while using that rumbling white noise of the focused flame to keep me centered. Then I bent into an arch from a warrior pose, opened my eyes and saw the stars above. There was a perfect moment there. The kiln breathed and I breathed and I could feel the stars breathing as the flame danced and the glazes ran and created something new in the crucible of intent. No thought, no worry, no past, no future, no focus beyond the moment when all the factors and variables evaporate and there is only peace. Harmony, even. 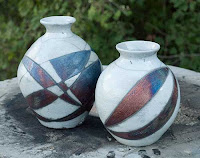 How long did it last? Not long since warrior poses are still a bit of a challenge for me and I fell out, practically on my head. That arching back thing is way harder than it looks. But the moment was there, however brief and fleeting.

And glaze was a success. It’s a basic copper matte that has been done to death in pottery circles but I still love it. Beautiful metallic colors and crazy effects, along with smoke, fire and no shortage of danger is why I got into pottery in the first place.

I have more bisque ready to go so we’ll be visiting with the glaze again in the near future, maybe even with some of the larger pieces I’ve been working on.

But speaking of projects, I racked out the latest melomel mead. I gave it a taste during the transfer but I can’t tell yet if we obtained honey-peachy goodness.  I used frozen peaches which wasn’t discouraged in all the online sources but wasn’t considered optimum either. But I didn’t think about a peach mead until after the local peach festival so it’s my own fault if this just doesn’t work out. 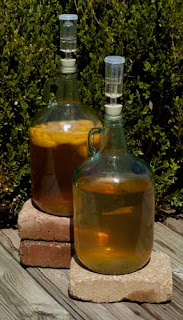 The melomels and sweetened meads are a bit more trouble than they are worth, I’m finding. I prefer dry meads anyway and I think I want to start working with larger batches. You can get about four 750ml bottles out of a 1 gallon carboy which should translate into about twenty bottles out of a 5 gallon carboy. Now that I have the procedure down, I ‘m not as worried about ruining a large batch.

Still thinking about bees so I can harvest my own honey but do I really need another project?

But it wouldn’t it be cool to make mead with your own honey?